Coming Feb 13: THE OCEANS BETWEEN STARS

The sequel to LAST DAY ON MARS in on the way, and here's the cover! Check out the description: 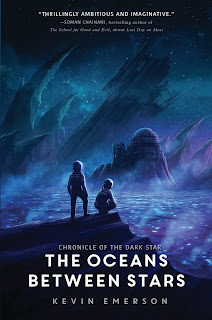 It is Earth year 2223, but the Earth, along with the entire solar system, is gone.Liam and Phoebe, having barely escaped our exploding sun with their lives, are in stasis for the decade-long journey to the rogue planet Delphi, where they hope to meet up with the rest of the human refugees, find help for their injured parents, and pass along the devastating things they discovered on Mars: that the destruction of our world was no accident, and that someone might still be after them, trying to finish the job.

Phoebe, however, is carrying her own dark secret. One that finds her waking up secretly at various points in their journey, changing their path through space. One that will decide the fate of the human race and many others besides. One that, very soon, she must reveal to Liam, whether he's ready for the truth or not.

Kevin Emerson's science fiction epic continues with a bold and terrifying quest into the outer reaches of time and space—one the will change our two heroes, and their friendship, forever.

Following up on starred reviews from Kirkus and Booklist, LAST DAY ON MARS has collected a few more great reviews. Check these out! 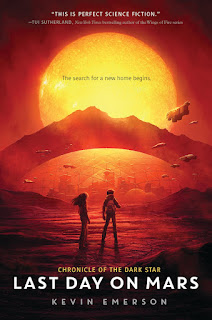 "Avid and reluctant readers will flock to this ambitious new saga, which will have them turning pages at breakneck speed and gasping with awe." -Spring 2017 IndieNext List

"Now more than ever, we need stories like these, blinking like beacons, showing us the path ahead."
-The Seattle Review of Books

"The first installment of the Chronicle of the Dark Star trilogy is ambitious, exciting, and just a shade terrifying." -Publisher's Weekly

"This fast-paced adventure story is recommended wherever science fiction is in high demand." -School Library Journal

"The book offers space travel, space chases... aliens, and espionage in an exciting start." - The Bulletin for the Center for Children's Books

LAST DAY ON MARS is here! 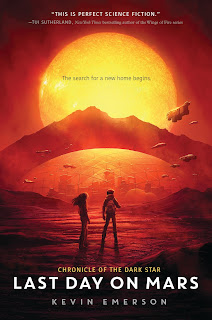 "With high-stakes tension, propulsive action, multidimensional characters, and vivid scenes, this well-wrought and thrilling series starter is perfect for middle-graders who prefer their sci-fi to be grounded in the realm of the possible." -Booklist *Starred* Review

"This is perfect science fiction." -Tui Sutherland, NYT Bestselling Author of the Wings of Fire series

THE STORY: It is Earth year 2213—but, of course, there is no Earth anymore. Not since it was burned to a cinder by the sun, which has mysteriously begun the process of going supernova. The human race has fled to Mars, but this was only a temporary solution while we have prepared for a second trip: a one-hundred-fifty-year journey to a distant star, our best guess at where we might find a new home.
Liam Saunders-Chang is one of the last humans left on Mars. The son of two scientists who have been racing against time to create technology vital to humanity’s survival, Liam, along with his friend Phoebe, will be on the very last starliner to depart before Mars, like Earth before it, is destroyed.
Or so he thinks. Because before this day is over, Liam and Phoebe will make a series of profound discoveries about the nature of time and space and find out that the human race is just one of many in our universe locked in a dangerous struggle for survival.
This is the first book in an ambitious space epic—a powerful, emotional, pulse-pounding story of the final days of humanity’s first home in the universe, and our desperate search for another.
Posted by Kevin Emerson at 11:01 AM 2 comments: